and he plays piano... EVERYWHERE!
;

erry Jordan started “playing piano” at age 5 (ask him to tell THAT story onstage sometime!) and his career spans 50 years. To Terry that’s scary! …but to his Fans that’s FANtastic! …to have decades of music in his fingertips …memorized!!!

He has won fans across the country with his unique talent at the keyboard. His style of world class musicianship combined with an engaging stage presence sparks an immediate rapport between Mr. Jordan and his audiences.

Whether performing on a Branson stage or on a cruise ship stage, for conventions or dinner crowds, Terry Jordan is a performer with an uncanny knack of knowing just what the audience wants… and gives it to them! Terry has had the pleasure of performing with celebrities and many others in his extensive career.

Music lovers of all types appreciate a performance by Terry, enjoying his diverse repertoire that ranges from classical to down-home foot stompin’ show stoppers. Mixed in between are his lush renditions of Broadway and Hollywood tunes, a touch of country flavor and the Big Band sounds of days-gone-by.

Not to forget good old gospel, Terry is a complete performer and delivers the type of entertainment an audience demands.

Terry Jordan is a Piano and Vocal Recording Artist who, from his home at Grand Lake in Oklahoma, appears across the Midwest in both solo and ensemble venues (Gospel & Giggles, Hometown Holiday, Tickles & Tunes, Yuleing Pianos, and Cherokee Yacht Club, to name a few!).  He has been Choir Director at several churches and Minister of Television Production And Music at Joplin Calvary Baptist.

Terry is a fifth-generation Oklahoman with Native American roots and holds Bachelor and Master Degrees in Music and Education. No wonder he’s the “Man of a Thousand Songs” — it’s hard to “stump” THIS piano player!

Terry is a veteran performer and seasoned entertainer, having shared the stage with numerous celebrities over the years — LuLu Roman, Vestal Goodman, B.J. Thomas, Barbara Fairchild, Lynn Anderson, Hank Williams Jr., the list goes on and on.  Whether starring on stages such as Music Country USA and Planet Branson, or featured weekly television shows such as “Oklahoma Live” KSBI-TV Oklahoma City or KODE-TV Joplin, his presence and program is always energetic, engaging, and reflects his congenial Christian demeanor. 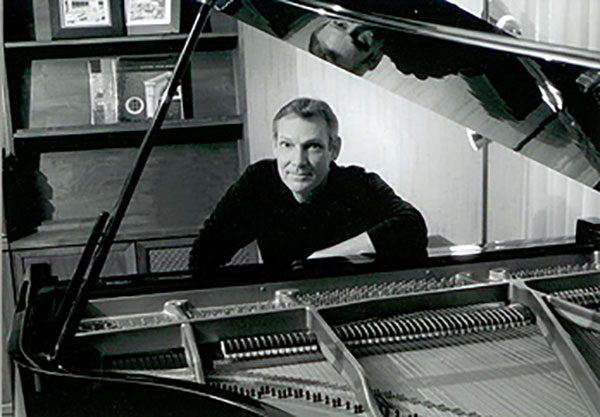 He has indeed played piano almost EVERYWHERE!!! … well, not “everywhere”… but in a LOT of places, for sure! Other Shows Terry has (or is currently) Featured in are: 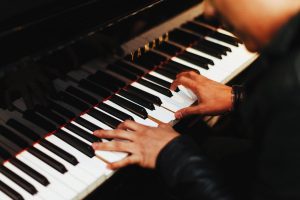 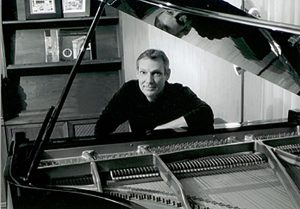 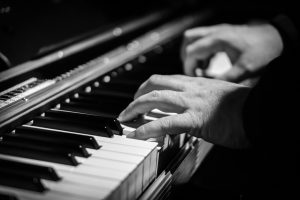 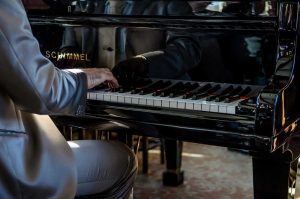 Terry has performed with:

Folks are instantly endeared to his God-given Piano talent, to his soothing Baritone singing voice, and to his down-home Christian demeanor.

“Heaven-inspired, I just flipped through the pages of Granny’s old red hymnal and played non-stop for 40 minutes straight till the recording equipment stopped,” explains Jordan.  “Every song spoke to my heart, and I guess to Granny’s heart too — because the top corner of the pages were turned down to mark all her favorites!”

When you hear Terry play these nearly forgotten old songs, precious memories of the good ol’ gospel hymns seem to instantly flood back as if it were yesterday.  WHERE HAVE ALL THE HYMNALS GONE?!

Your congregation will be spiritually re-energized with good ol’ Gospel favorites — hand clappin’, toe-tappin’, and singin’ along, start to finish. There’ll be joy and laughter, waves of inspiration and floods of memories from this “old-time religion” …a true Singspiration!

Does your Church Music Program need a “Tune-Up”?… or a good “shot-in-the-arm”? Mr. Jordan’s professional career, extensive experience, and Masters Teaching Degree is available to YOU! Ask for an expert Consultation or On-Site Music Clinic for your Choir, Band, Praise Team, and/or for your Worship Leader(s)!!! 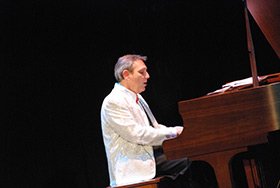 Hearts are touched, decisions made, and messages heard through words of “lost” hymns like:

…but what all exactly has he done over these 30+ years?  It’d be difficult to put it all down in words!  Briefly and generally, lets try to compile a history:

Fresh out of college with a Bachelor of Music Education Degree (Central State University, Edmond OK, now University of Central Oklahoma) as well as a Master of Science in Teaching Degree (Northeastern State University, Tahlequah OK), Terry became “Mr. Jordan” as he taught K-12 Music in the Public School Systems of Kansas and then eventually back to Oklahoma.  But after 14 years of teaching, Terry took his unique blend of music and hit the road running…

First with the Branson-based roadshow called Ozark Express and then with his own stage show called Music Country, U.S.A. to great reviews. During the 1990’s Terry built a solid solo career, drawing on his diverse musical background and soon starred in Branson on his own stage. Already with credits sharing the stage alongside celebrity names such as Lynn Anderson (Country) to  B.J. Thomas (Pop), the Original Texas Playboys (Swing) to Vestal Goodman (Gospel), Terry Jordan’s Candlelight Cabaret in the Planet Branson Theater showcased his one-of-a-kind style blend of country, pop and classical to produce a thrilling performance that received raving critical acclaim as bus loads of Branson fans came to him instead of he continuing to travel around to them!

Terry is in demand as a solo pianist and as a recognized Special Guest performer, television personality, recording artist, choral conductor and clinician, Gospel inspiration and arranger in the creative literary and musical arts realm. For a decade Terry was the resident pianist/entertainer at the famed Shangri-La resort in Northeast Oklahoma and has been a featured emcee and guest entertainer in a variety of events, including the Miss America Pageant Preliminaries. He has had the pleasure of performing with Teddy Phillips’ Orchestra and salutes to Guy Lombardo and other large groups such as the Glenn Miller Orchestra during International Music Festivals.

With an upbringing well immersed in good ol’ Gospel music, Jordan commands the talent and inspiration necessary to move Christian audiences through tears and laughter, solemn prayer and joyful noise. For five years, he was seen across the Midwest in a weekly TV airing of Calvary Baptist Church (Joplin MO) as their Worship Leader and Pianist, Choir Director and the Executive in Charge of Production.

After Branson, Terry took respite in exotic Puerto Vallarta, Mexico, enjoying the tropical resort area and performing occasionally for international guest audiences. After a short two years, he returned to the USA raring to go again! He did the only thing he knows how to do. . . hit the ground running!

“Music truly is a universal language. There are no colors, religions, politics or barriers when musicians play,” says Terry. He is a consummate performer. His showmanship and pure Baritone singing voice, along with his down-home natural communication with any audience, combine for a wonderfully entertaining and unforgettable experience. . . no matter the country or the language.

Today Terry Jordan chooses a slower pace and resides in his native Oklahoma on the shores of Grand Lake where he is host entertainer at Cherokee Yacht Club and also travels with several shows (see headline above and click on other page links).  In his home (locally known as Honey Creek Lodge) he spends time in the studio (Honey Creek Studio) recording America’s favorite tunes. . . his way.  Fans can’t get enough. You too will be a Fan once you experience Terry Jordan at the Grand Piano.